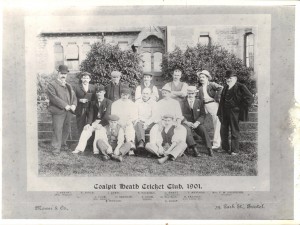 We are looking for volunteers to help piece together more of the history of the Cricket Club. If you are interested or can help please contact the club’s Fundraising and Promotion Officer

Coalpit Heath Cricket club was first established in 1845, making it one of the oldest clubs in the area. There are many old photographs from around the turn of the 20th century which are displayed in the clubhouse. Many will recognise names such as Tremlin and Tovey that have been synonymous with the club for many years.

1974 – Entered the National Village Knockout for the first time

1982 – Land purchased for the cricket club at Churchleaze

The location “Churchleaze” is named after two Coal Pits Churchleaze 1 & 2 which are located the other side of the lane from the entrance to the club house.  You can still just about see a depression in the field opposite the clubhouse marking the entrance to Churchleaze 1. The club is located next to the dram way, a historic horse drawn railway, linking the mines in Coalpit Heath to the River Avon– see http://en.wikipedia.org/wiki/Coalpit_Heath for more details.