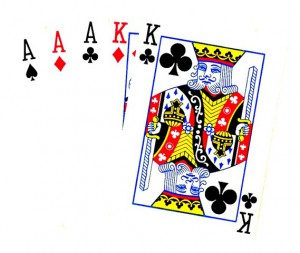 Members can join in a friendly and organised poker tournament which is held monthly at the cricket club.

It costs just £5 to buy-in with an optional £5 re-buy (which is time limited). The prize monies are shared between 1st, 2nd and 3rd placed players with a proportion going to club funds.

There is an organised league with players earning points based on finishing position with the winner being crowned league champion (there is a perpetual trophy and bragging rights at stake).

League standings can be seen on the League Ace website. At the end of the league season the top players are invited to take part in the end of season ‘free roll’, held at the club.

Players of all standards are welcome. Feel free to just turn up or for further details including upcoming dates, please see club notice boards or contact poker organiser Jack Williams on 07851 184650.